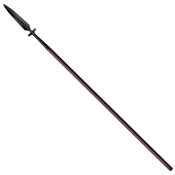 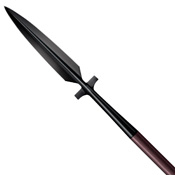 The Man at Arms was a stalwart and dependable fighter who exhibited great martial prowess with a range of weapons. He was a capable and competent warrior who was the veteran of many conflicts and was often first into the fray. Although he was not a Knight, he fought and trained alongside them as a brother in arms. To honor these rugged, reliable, salt-of-the-earth warriors we have created a range of true journeyman’s weapons that we have called the Man at Arms Collection. Each of these battle-ready pole-arms features 1055 Carbon steel and is deeply blued to a lustrous finish and comes complete with a premium American wood shaft. The Winged Spear was a true product of the battlefield. Its blade was wide and sharp enough to almost double as a pole arm, while its pronounced wings can be used to trap and pin an opponent’s limbs, snag his shield and parry and entangle his weapons. If you study battlefield arts or have a passion for historical re-enactment, we heartily recommend purchasing a Winged Spear by Cold Steel.