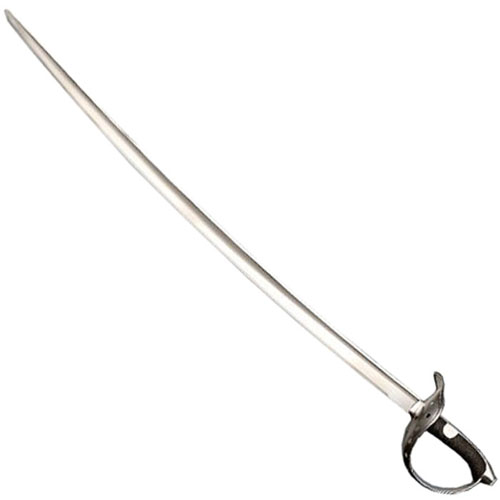 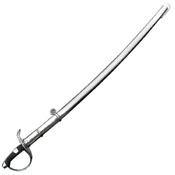 The 1904 Austrian Cavalry Saber was designed by the Inspector General of the Cavalry and, after undergoing a number of minor revisions, was officially adopted for use in 1908. It was issued throughout the Austro-Hungarian Empire and was well received by troopers and officers alike for several reasons. Chiefly, it offered a slightly curved blade with a pipe back and strong point that was ground thin enough at the edge to cut well in the mêlée while remaining stiff and strong enough to thrust with in the charge. Also, it had a low profile and an asymmetrically shaped, body-hugging guard, whose shell was pierced by 27 holes which reduced weight and improved balance. This uniquely shaped half basket guard gave excellent protection to the thumb, fingers, wrist and forearm without the awkward "bulk" associated with other saber guards of the day. After years of fencing with 1904 Saber (fitted with a 7075 Aluminum blade), Cold Steel president, Lynn C. Thompson, decided to produce a replica based on an original Professor Anthony De Longis' personal collection. the 1904 Austrian Saber incorporates the same high carbon steel, pipe black blade, half basket guard and fish skin grip as the original. It comes combat sharp, complete with an exact copy of the original's steel scabbard. It's equipped for battle and eager to help you carve out your own empire.