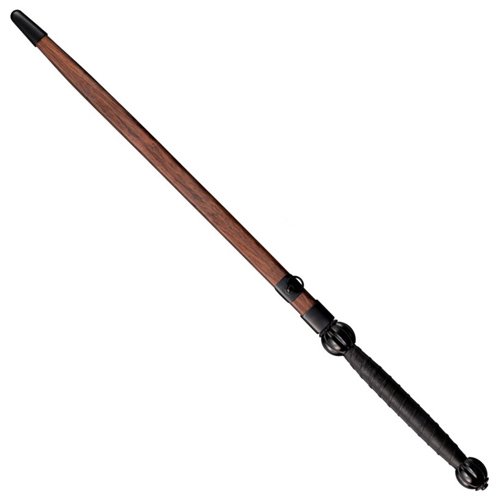 Steven Seagal is a Martial Artist who should need no introduction. He found international acclaim and celebrity for his high-octane Action Movies, but he is first and foremost love is the world of Martial Arts. With an encyclopedic knowledge of the Japanese warrior arts, a 7th Dan Black Belt in the art of Aikido and a lifetime of training, he is still a much-in-demand instructor and consultant. Whether working specialist techniques with UFC stars Lyoto Machida and Anderson Silva or travelling the world teaching seminars, there is no doubt that Steven is still a force to be reckoned with! The stunning signature edition Steven Seagal Sword Breaker takes its inspiration from an antique weapon from Steven's personal collection - but rather than simply make an exact copy of the original, Steven worked with Cold Steel President Lynn C Thompson to bring together their combined knowledge to create a modern combative version of the historical classic. Steven presented Cold Steel with an interesting challenge. His fighting style, grounded in a lifetime of study in Aikido, is fast and fluid, with deft movement and precision timing, but Steven is also a very tall, very strong individual, capable of wielding bigger heavier weapons - and hitting like a freight train!! They developed a Sword Breaker that was big enough to deliver powerful percussive blows, but still perfectly balanced and capable of nimble flowing moves and subtle counters. Taking the original weapon as inspiration, Lynn and Steven lengthened the handle and counter balanced the Sword Breaker to facilitate a one or two handed grip, then added a sharp thrusting point to make a formidable new weapon! The paralyzing power of the Sword Breaker has to be felt to be believed. Its dense cross section repels an opponent's sword like water on wax. Not only shrugging off strikes with ease, but often damaging the sword in the process! Nicknamed the "Sword Slayer" during prototyping, this fascinating weapon is also a thing of beauty. With richly blackened fullers and hand polished highlights, the "blade" is as good looking as it is effective.