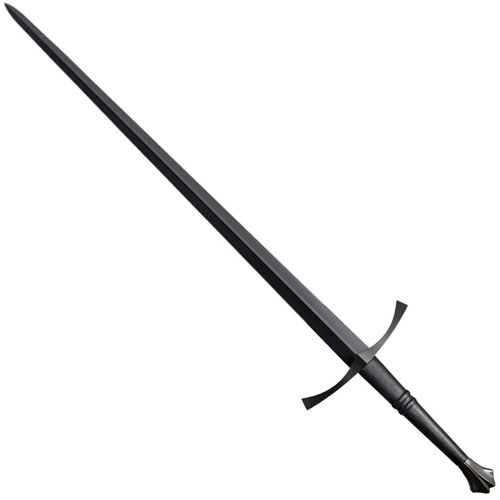 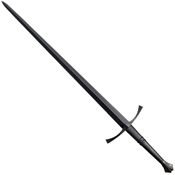 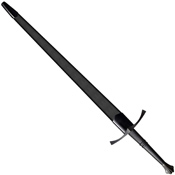 The Man at Arms was a warrior, pure and simple. A stalwart and dependable fighter who exhibited great martial prowess with a range of weapons. He was a capable and competent warrior who was the veteran of many conflicts and was often first into the fray. Although he was not a Knight, he fought and trained alongside them as a brother in arms. To honor these rugged, reliable, salt-of-the-earth warriors we have created a range of true journeyman's weapons that we have called the Man at Arms Collection. Historically, the Long Sword featured a distinctive cruciform hilt and a long, double edged blade that was equally adept at opposing both light and heavily armored foes. Its extra-long blade offered the reach and leverage for powerful stabbing, cutting and chopping strokes while its long cross guard and heavy pommel were useful for hooking, striking and smashing. When heavy plate armor was encountered, strikes with the edge were often abandoned in favor of a “Half-Swording” technique; where one hand grips the hilt and the other the blade for grappling and in-fighting - to better direct the point in powerful jabs, and to accurately thrust at the small gaps and joints in a suit of armor. Cold Steel’s Italian Long Sword is designed so that the blade and balance slightly favor the thrust, while still being capable of delivering astonishingly effective cuts. It features a simple cruciform hilt, long upturned cross guard, leather-over-wood grip, and a heavy counter-balancing fish tail pommel. Scaled down in size but almost identical in appearance, our optional companion dagger is sharply tapered with a double edged blade. Ideal as an offhand parrying tool, a back-up blade or just as a fine dagger to wear on your belt!